Copenhagen an oasis of happiness in Northern Europe

Sostravel.com continues its journey to discover the most suitable destinations for a short weekend and a small escape from the daily routine, and traveling is always a great idea. Today’s appointment flies us to Denmark and precisely to Copenhagen.

Denmark in recent years has become part of all the rankings of the most visited places in Northern Europe; Copenhagen in particular, was elected by Lonely Planet as the best tourist destination for 2019 and is considered the “happiest city in Europe” thanks to the typical Danish lifestyle based essentially on entertainment: the hygge. This term, which literally translates to warmth and intimacy, indicates a true lifestyle that has the sole purpose of leading a life immersed in a welcoming atmosphere and enjoying the small moments of happiness. This is the atmosphere that reigns in Copenhagen when visiting places that have become iconic for the city.

The hygge side of Copenhagen starts from Nyhavn, one of the most iconic and colorful places in the city of Copenhagen; an area that was born as the center of Copenhagen’s commercial life of the past, nowadays one of the liveliest neighborhoods with old houses used as restaurants where you can taste typical foods such as herring and Schnapps. The main point of interest in this neighborhood is the house located at number 9, the oldest of them all, in which the writer Andersen lived.

After finishing the tour in the Nyhavn district you can head towards the city center and visit the famous mermaid statue, a romantic sculpture that has become part of the city’s most famous attractions and became famous thanks to the Disney cartoon. From here, you can then wander around the characteristic streets of the city by visiting some places such as the main square called Radhuspladsen and the square where the neo-Renaissance style Town Hall stands. Continuing your walk, you can also visit one of the famous totally pedestrian streets of the city or the Strøget. A street that expands for 2km characterized by a continuous alternation of small shops, chic restaurants and refined cafes, suitable for relaxing, doing some shopping after admiring the beauty of the Danish city.

During the stay in Copenhagen it is almost obligatory to visit Christiania, one of the most informal areas of the city where a totally alternative lifestyle reigns supreme. Here, you can get in touch with a self-governing, hippie and anarchist community that was founded in the city in 1971. Christiania is nothing more than a small city in Copenhagen, inhabited by about fifty collectives that entirely manage the crafting, artistic and musical activities.

Sostravel.com has selected for you two of the many experiences that should never be missing in your itinerary when visiting Copenhagen. The first is the tour of the city canals that will allow you to observe Copenhagen from another point of view and admire the numerous floating houses that decorate its banks; the second is entirely dedicated to entertainment, namely a visit to Tivoli Gardens, one of the oldest amusement parks in the world dating back to 1843, located in the heart of the city; a park much appreciated not only by tourists but also by the Danes for their days in the open air. If you want to totally immerse yourself in Danish culture, all you have to do is equip yourself with a bike and ride through the streets of the city on two wheels. Copenhagen is in fact considered to be the European capital of green traffic, a true paradise for cyclists who can safely walk through the streets of the city thanks to the presence of 290km of cycle paths. In Copenhagen there is a true bicycle culture supporting the orientation of the city towards an eco-sustainable point of view.

To complete your travel experience in the city, all you have to do is relax in the numerous cafés in the city and sample Danish cuisine. Among the typical dishes you will find the smørrebrød, a Danish sandwich consisting of a slice of rye bread, usually buttered, with other ingredients such as eggs, shrimp, cheese, herring and others; the Frikadellers or pork meatballs that are flavored with the addition of nutmeg, cinnamon and then cooked in beer; and the Stegt flæsk composed of crispy pork accompanied by boiled potatoes and parsley sauce: the Danish national dish considered the traditional recipe par excellence.

Sostravel.com has chosen Copenhagen for you, a city that stands out for its Viking origins, which is confirmed to be an excellent destination for a weekend to live in the name of a healthy lifestyle completely focused on personal well-being 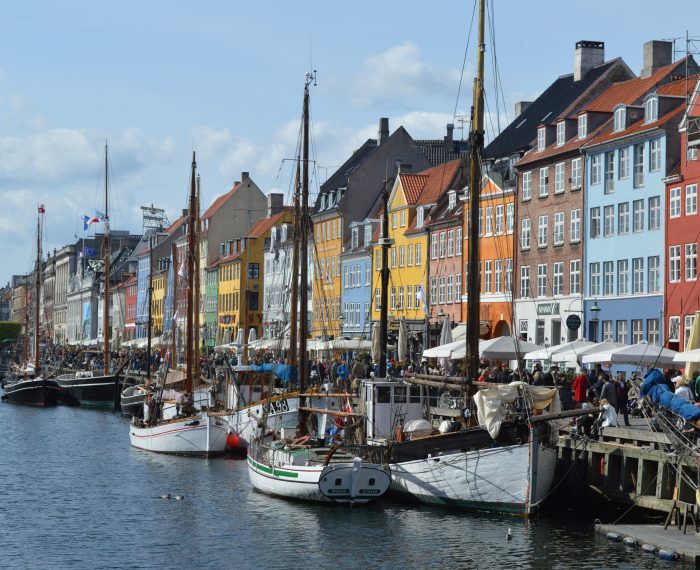 Copenhagen an oasis of happiness in Northern Europe