Santorini: a volcano of beauty

In today’s appointment sostravel.com takes care of all the lovers of holidays in total relax and takes you to discover one of the most popular destinations for tourists, the undisputed star of the Greek islands: Santorini.

An island known for its white houses that create a contrast with the blue sky, worthy of every postcard; for its crystalline sea, for its romantic sunsets and beaches of volcanic sand, it is confirmed every year as one of the most visited Greek islands with a number of tourists that is around a million and a half.

It is an island of volcanic origin located in the waters of the Aegean Sea halfway between Crete and Athens within the Cyclades archipelago; once called Thira, today it takes the name of Santorini leaving the original name to a group of islands that orbit next to her. But what is its peculiarity?

The particularity of the island that contributes to making it unique is the caldera. For volcanology experts the caldera is only a natural phenomenon due to the collapse of the volcano inside it, but for the tourists who go to Santorini it is the most beautiful area of ​​the island. In fact there are many tours organized to observe this part of the island directly from the sea and for the more passionate about trekking, there is also a path that leads from Fira to Oia that allows you to observe the great crater of over 10km, from a higher position. The volcanic origin makes Santorini an island that stands out from all the other Greek islands. The black of the sand and the landscapes offered by the island creates a natural contrast with the rest of the island and at the same time makes it elegant and suitable for the needs of any type of tourist.

On the opposite side of the caldera instead, there is space for numerous beaches of strictly black sand, from the most crowded to the less known. Among the most famous beaches there is certainly that of Amoudi Bay very close to the village of Oia. This beach is characterized by an emerald-colored water and directly overlooks the caldera protected by red cliffs. A spectacle to be photographed! Among the most crowded but more organized beaches of Santorini, instead, we find that of Kamári, characterized by a sea consisting of a shallow seabed and straw umbrellas, a hallmark of the beach’s popularity.

For those who want to fully enjoy nature and get away from the crowd of tourists, the best beaches are those north of the island. You can choose whether to enjoy the sun surrounded by rocks that surround the beach of Koulombos, being totally embraced by nature or taking a look, between one bath and another, at the boats of local fishermen that choose the beaches of Pori and Vourlous.

Santorini is a clear example of how nature reserves the creation of breathtaking beauties for man; the numerous eruptions to which the island has been subjected have made it become one of the most popular tourist centers for tourists from all over the world; an island where sand, water and air come together to create an atmosphere worthy of note!

Scents and colors of Provence2 July 2019
The Turquoise Coast: a journey in the crystal clear and incredibly turquoise sea9 July 2019 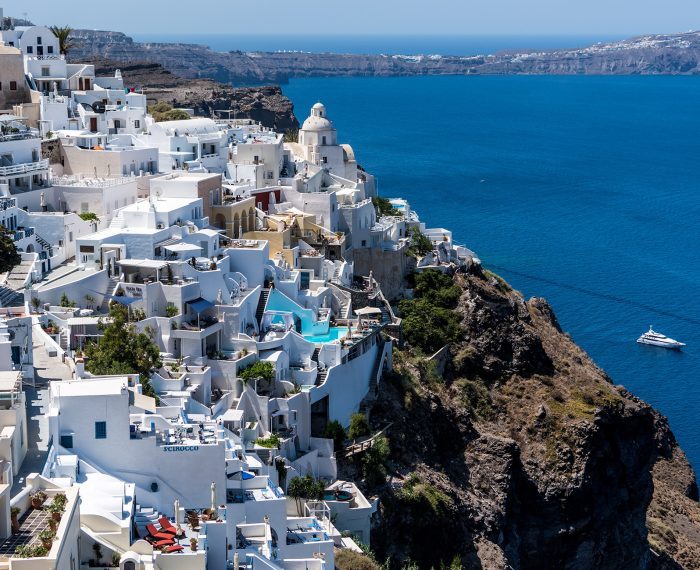 Santorini: a volcano of beauty