Today sostravel.com takes you to the discovery of Bari, a small jewel of Southern Italy on the Adriatic Sea. Bari looks like a city caressed by the wind, overlooking the sea where it is possible to find a magical atmosphere that contains life, history and tradition.

The city sees its origins in very ancient times but this does not take away its youthful charm that can be discovered walking through the streets; initially conquered by the Romans it became one of the most important commercial centers of the peninsula. Later with the Byzantine domination it became the central fulcrum of the peninsula thanks to its port, and one of the main locations for embarking during the crusades; it was precisely the Byzantine domination that gave Bari its most prosperous period.

With its seafront that boasts the largest extension of Italy, Bari conquers every tourist who is pampered by the sea breeze and the music coming from the small bars where it is possible to linger for a tasty aperitif after admiring a wonderful sunset.

Our journey continues to discover the heart of the city among the streets of Bari Vecchia which, through the sounds and scents of the alleys, is able to revive the evocative atmosphere of the arrival of merchants from the East. Walking through the alleys of the ancient village means immersing yourself in the everyday life of Puglia, wandering through the noisy, fragrant and crowded streets of tourists and children who, especially in summer months, have fun with their bicycles, making tourists smile. In the heart of Bari Vecchia there is the Basilica of San Nicola, architectural beauty in Romanesque style, which houses relics of the Saint and numerous frescoes. The bond that Bari has with San Nicola is very strong and particularly felt among its citizens. History tells that on May 8th 1087, 62 Bari sailors returned triumphant, after having retreived the body of the Saint Myra in Turkey that had been stolen by the Muslims. Old Bari has an inimitable charm, in both day and night thanks to the presence of numerous clubs.

A vacation in a city of Southern Italy cannot absolutely miss a gastronomic tour that starts right from Bari Vecchia; here it is in fact possible to have a first taste of the culinary culture of Bari by visiting the “via delle orecchiette“, now a fixed stop for all tourists. This route, although not very easy to find, has become famous thanks to the presence of seven women who, from the early morning hours, prepare the famous orecchiette every day. It is precisely in this street of the city that life flows slowly and far from the thoughts of the big cities, it is as if time stops and for a moment we go back, catapulted into full Bari tradition. The “via delle orecchiette” is now a set stop for every tourist who goes to Bari and above all a place where you can buy the real orecchiette or simply take pictures immortalizing true tradition.

Talking about gastronomy, sostravel.com has identified for you one of the most important events for Bari: the Radici del Sud festival that takes place at the Norman Swabian Castle of Sannicandro from 4 to 10 June 2019. During this week wines and oils of Southern Italy are celebrated; a week of conferences, wine tours, competitions and tastings of products presented by companies from Puglia, Basilicata, Campania, Calabria and Sicily. Within the event, a competition takes place on wines from Southern Italy that will be divided by vine and judged by great experts in the wine sector. The public will be able to participate in the show on Monday June 10th, tasting and buying the typical gastronomic products of the South, meeting the producers and discovering their realities. Finally, on Monday evening the show will end with dinner in the courtyard of the Castle where the wines and oils that participated in the competition will be combined with the dishes from the best chefs of Southern Italy.

Visiting the surroundings of Bari, about 30km from the city, the first destination that captures the attention of all tourists is the town of Polignano a Mare considered the Pearl of the Adriatic. Polignano a Mare looks like a medieval village situated on a high and jagged cliff surrounded by a crystalline sea where you can dive while admiring an uncontaminated seabed. With its narrow streets, its white houses and its position close to the sea, Polignano a Mare has maintained an unaltered charm over time. Birthplace of the great Domenico Modugno, it has always been a pilgrimage destination for all the fans who go there to visit the statue created to pay tribute to the great artist, who with his successes as “Volare“, was an icon of the Italian musical tradition.

The city of Bari and its surroundings, therefore prove to be excellent destinations for a short (or long) weekend, where you can fully discover the essence of Southern Italy with its colors, scents and sounds.

A dream vacation on the island of La Réunion between sea, fun and relax7 June 2019 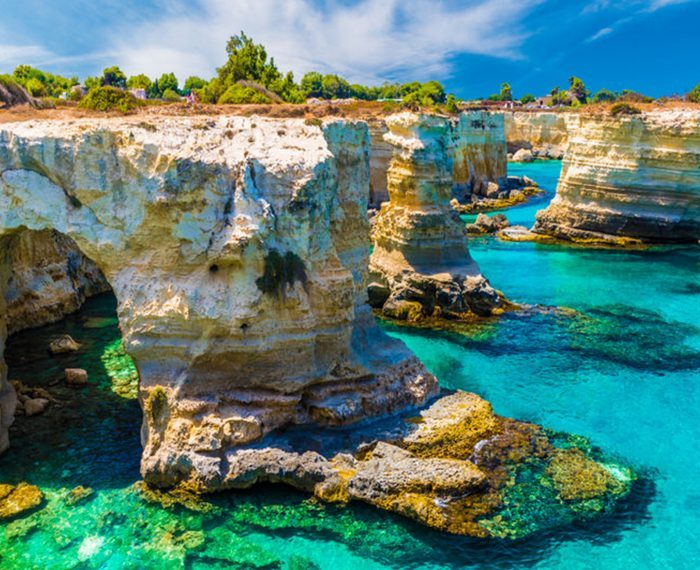